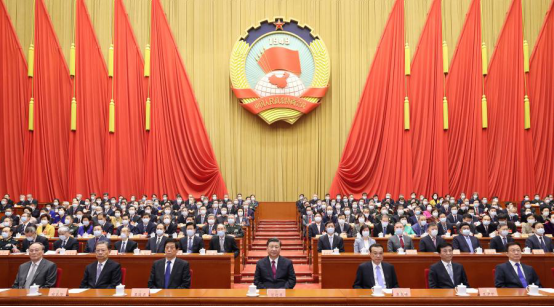 The political advisors unanimously agreed to support the National People’s Congress — the national legislature — in making a decision on improving the electoral system of the Hong Kong Special Administrative Region.

Addressing the meeting, Wang Yang said the session had focused on the blueprint for the country’s social and economic development over the next five to 15 years.

This year marks the centenary of the CPC and the first year for the country to implement its new five-year development plan and begin its new journey toward fully building a modern socialist country, he said.

Wang called on the CPPCC to pool wisdom and strength of Chinese people at home and abroad to make contributions to securing a good start for fully building a modern socialist country.

The CPPCC must take upholding and strengthening Party leadership as the fundamental political principle and major political responsibility, he said, urging the CPPCC to better play its role as a platform for consultative democracy.

Wang also called for continuous efforts to advance the cause of the CPPCC and the development of the CPPCC as a specialist consultative body, so as to celebrate, with outstanding achievements, the centenary of the CPC.

Before the closing meeting, Wang presided over a meeting of the Standing Committee of the 13th CPPCC National Committee.