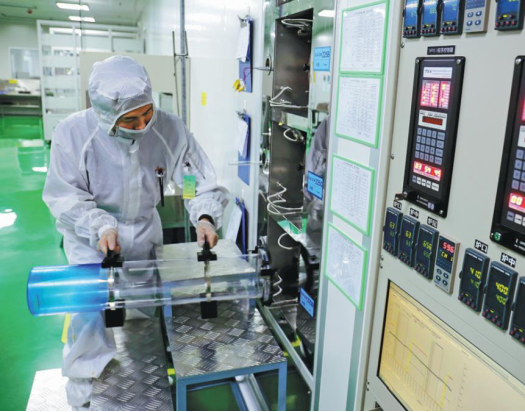 Automotive chips made in China should be promoted and the independence of the domestic supply chain should be enhanced to boost the development of the new energy vehicle and smart vehicle sectors, several deputies to the 13th National People’s Congress suggested during the ongoing two sessions.

Chen Hong, a deputy to the NPC and also the Party secretary and chairman of SAIC Motor Corp Ltd, China’s largest carmaker, made a suggestion on the matter.

Chen said more support for the automotive chip industry would be in order. He stressed fostering top-level design in the field.

“Such support will boost the willingness, confidence and enthusiasm of vehicle and auto part companies to use more homemade chips.”

He also said such moves can start with chips with lower technical thresholds, which would help improve the country’s capability and competitiveness gradually in this area.

“The support policies should include not only subsidies for R&D but production line investments at all levels, and also support for first-batch enterprises that place purchase orders,” Chen said.

He also suggested that insurers should be encouraged to offer insurance for product liability to boost the use of domestic chips. That will help lower any risks in using homemade technologies for multiple parties, including vehicle and chip manufacturers.

Chen said automotive chips made in China face a few challenges. For instance, only a small number of vehicles use them as of now. Automotive regulatory certification involves long cycles. Technology used tends to have relatively low added value. And there is high dependence on upstream industries.

Data from the Ministry of Industry and Information Technology showed that China’s NEV production and sales volume have top global rankings for six consecutive years to 2020.

As of the end of last year, the total number of NEVs in the country reached 4.92 million units. The country had in November set a goal that NEVs will account for around 20 percent of the entire sales volume of new vehicles in 2025.

NPC Deputy Yin Tongyue, also the chairman of automaker Chery, said that Chinese automakers rely on imports for more than 90 percent of their chips, which in the long run will affect the quality, development and growth of smart networked vehicles in the country.

Yin made a suggestion to the NPC that the country needs to formulate a development outline for the direction that technology should take in the field of automotive chips.

He said the outline should set goals for the growth rate of the domestically produced chip products and promote the construction of the chip industry chain.

Zeng Qinghong, an NPC deputy and chairman of GAC Group, also suggested that the country should input human, financial, and material resources to solve the chip problem and strengthen the construction of the industry chain for key auto parts.

He said more social capital can be encouraged to invest in the fields of chips and key auto electronic components.

Chen also suggested that the content of in-vehicle digital services should be subject to supervision, and punitive measures and group compensation mechanisms should be formulated to deal with violations of laws and regulations in the field of data security.