– 50 years ago, a chance encounter between paddlers from China and the U.S. previewed the “Ping-Pong Diplomacy” that led to the normalization of bilateral ties.

– Withstanding the changes in China-US relations for half a century, “Ping-Pong Diplomacy” still has profound implications in an ever-changing world.

It has been half a century since China invited the U.S. table tennis team for a historic visit, and “Ping-Pong Diplomacy” still has profound implications in an ever-changing world.

On Saturday, a special event was staged in Shanghai in commemoration of the 50th anniversary of “Ping-Pong Diplomacy.”

”The Ping-Pong Diplomacy of 50 years ago is of special significance in the history of China-U.S. relations,” Chinese Ambassador to the United States Cui Tiankai said in a video speech to the event.

”The little ball moves the big ball” is a phrase that Chinese people often use when referring to that historical period, where table tennis became an unlikely diplomatic tool. 50 years later, the little ball is still moving in developing ties between different countries. Players from China and the United States take part in a friendly match to commemorate the 50th anniversary of the Ping-Pong Diplomacy at the International Table Tennis Federation Museum in Shanghai, east China, April 10, 2021. (Xinhua/Wang Xiang)

A CHANCE ENCOUNTER MADE HISTORY

The story of a chance encounter between deceased world champion Zhuang Zedong and American paddler Glenn Cowan on April 4, 1971 has been heard and repeated by many.

After finishing his training session during the 31st World Championships in Nagoya, Japan, Cowan found himself aboard a bus with the Chinese team members on his way to the venue, a complicated scene in a period featuring a Cold War gulf between the two countries.

Despite other members’ worried response, Zhuang stood up and reached out to Cowan. The world champion communicated with Cowan and gave him a piece of tapestry satin as a gift.

A handshake between the two off the bus was captured by journalists on site, and related pictures soon hit the headlines on local newspapers.

”He (Zhuang) did a meaningful thing in the right way at the right time,” commented the ITTF honorary president Xu Yinsheng, who coached the Chinese team then. 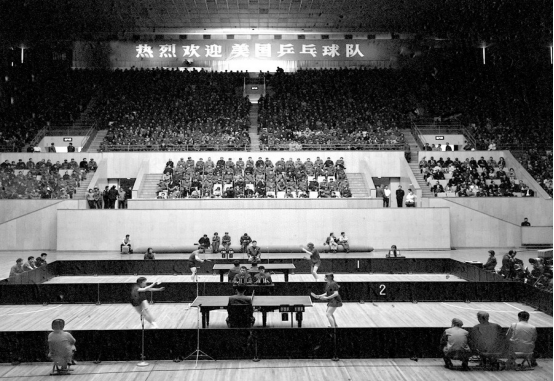 Players of China and the United States take part in a table tennis friendly match in Beijing, China, April 13, 1971. (Xinhua)

At the invitation of the Chinese delegation, a flight with the U.S. table tennis team on board landed at the Beijing airport on April 10, 1971. They became the first U.S. group to visit since the founding of the People’s Republic of China in 1949. The U.S. team played exhibition games with Chinese counterparts in Beijing and Shanghai.

”The air in that game was alive. ‘Ping-Pong Diplomacy’ motivated all Chinese people, and made huge contributions to bringing China and the U.S. closer. Through table tennis, a gate for friendly exchanges was opened,” said 71-year-old Sun, who led the Chinese team to several World University Games and Championships as either a coach or a team manager.

The Chinese team paid a return visit the next year. The mutual visits broke the ice in two decades of estranged Sino-U.S. relations and eventually led to the normalization of bilateral ties. 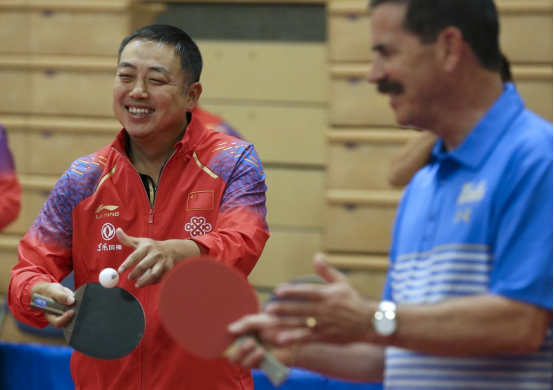 UNCHANGED IN A CHANGING WORLD

”Chinese table tennis is shared with the world,” said the sport’s legend Liu Guoliang after being appointed the Council Chair of World Table Tennis (WTT) in 2020.

China is a dominant force in table tennis, claiming 28 out of 32 gold medals since the sport was introduced to the Olympic Games in 1988.

The table tennis link between China and the U.S. is not only about commemoration activities, but also technique exchanges on the court.

During the 2019 World Championships in Budapest, four Chinese players, including Grand Slam winners Ma Long and Ding Ning, conducted a joint practice with their American counterparts in the venue. 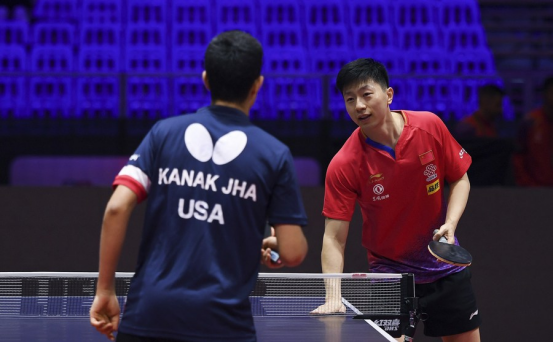 Ma Long (R) of China and Kanak Jha of the United States communicate with each other during a joint practice session at the 2019 ITTF World Table Tennis Championships in Budapest, capital of Hungary, April 19, 2019. (Xinhua/Tao Xiyi)

Now, “Ping-Pong Diplomacy” is present in a wider range. Not just complacent with its dominance in world table tennis, China has been engaging in deeper cooperation with other countries and regions, trying its best to make the sport more globally popular.

A training center of China Table Tennis College in Papua New Guinea (PNG) was set up in November, 2018, when world champion Shi Zhihao and Grand Slam winner Zhang Yining gave instructions to local players in their training. After receiving training in the China Table Tennis College, the PNG table tennis team won two silver medals in the Pacific Games next July, the best result in its history.

”What has given me much pride as a table tennis professional is more than just the good results athletically that we have achieved, but also that table tennis has made great contributions to Chinese diplomacy and people-to-people exchanges with other countries and regions,” said Shi, current ITTF vice president. 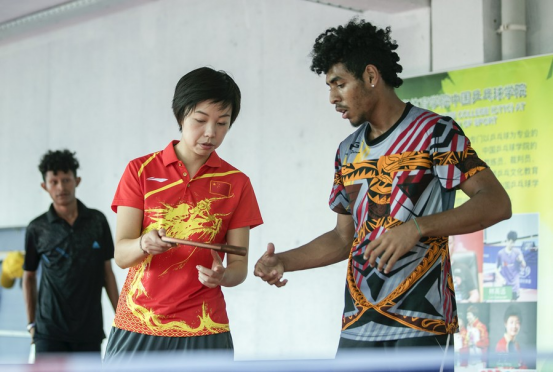 Outside the court, Chinese sports equipment giant Double Happiness (DHS) has been a gear supplier of six Olympic Games and 18 World Championships. The world’s leading producer in table tennis gear has also been serving the country’s “Ping-Pong Diplomacy” since its foundation 62 years ago.

”I’m proud of what we have done related to the ‘Ping-Pong Diplomacy’,” said Lou Shihe, general manager of the DHS.

China’s Xu Xin (R) shares the trophy with South Korea’s Yang Haeun on the podium during the awarding ceremony for the mixed doubles final match at the 53rd Table Tennis World Championships in Suzhou of east China’s Jiangsu Province, May 1, 2015. (Xinhua/Li Xiang)

The world nowadays is different from half a century ago, and especially the COVID-19 pandemic shows the necessity of consultation and cooperation among different countries and regions so as to effectively address global challenges, and sports should have a role to play.

”Today, the China-U.S. relationship faces a critical choice as to its future path. The two sides should inherit and carry forward the spirit of ‘Ping-Pong Diplomacy’ featuring mutual respect and seeking common ground while reserving differences,” Cui noted.

”At present, the pandemic and the great changes unseen in a century are intertwined, and traditional and non-traditional security threats have emerged one after another. In the face of varied global challenges, China and the United States can and should cooperate in more rather than fewer areas, and the fundamental force that moves the big ball is not weakened, but grows stronger.”

”Friendship from generation to generation is a common desire for both Chinese and American people,” said table tennis legend Zhang Xielin. 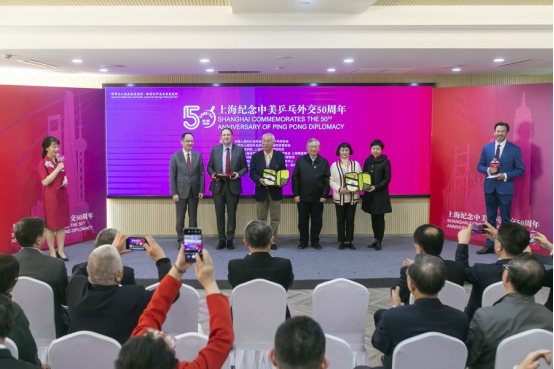 As another witness of the “Ping-Pong Diplomacy,” Zhang expects that through this commemorative event, people can remember the history and continue with people-to-people exchanges and friendship.

”There are so many memories to cherish and so many more to make,” she noted.

Zhou Qingjie, director of Sports Exchange Research Center of China Foreign Affairs University, said sports exchanges have grown to an important tool in building international relations and a community with a shared future for mankind, as relevant parties have attached greater importance to people-to-people exchanges.

”The pandemic has raged the world since early 2020, and the international community has been in a complicated scenario. Different countries and their people call for more mutual exchanges than ever to realize peace and development and win-win cooperation, and sports has a unique role in fulfilling these visions,” he said. 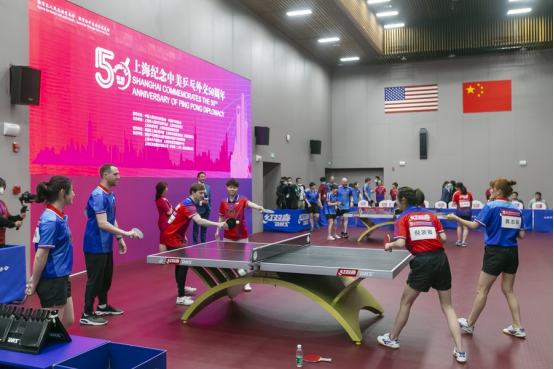 Players from China and the United States take part in a friendly match to commemorate the 50th anniversary of the Ping-Pong Diplomacy at the International Table Tennis Federation Museum in Shanghai, east China, April 10, 2021. (Xinhua/Wang Xiang)

Jeffrey Lehman, vice chancellor of New York University Shanghai, participated in the match. He recalled the scene of watching an exhibition game in 1972 as a high school student.

”Obviously (it was) a turning point. It was a critical moment that the story of these two players changed the history,” Lehman said.

”As for sports exchanges in the post-pandemic era, we need to blaze new trails in their form and open up more channels to embrace the world with an open mindset,” Zhou commented.

”Today’s world is totally different from that in 1971. ‘Ping-Pong Diplomacy’ cannot be replicated, but its implications deserve to be cherished,” said Lyu Xiang, a Sino-U.S. relations expert of the Chinese Academy of Social Sciences.