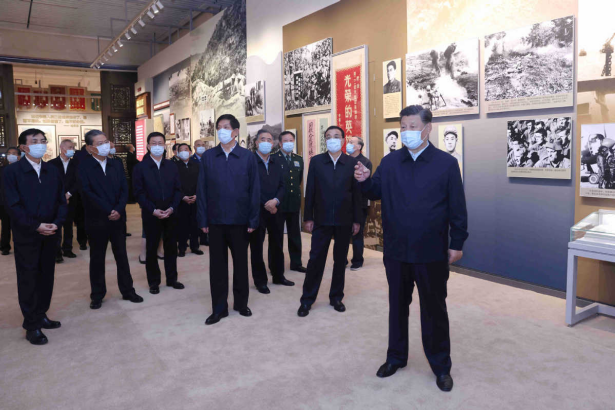 President Xi Jinping and other Party and State leaders visit on Monday an exhibition in honor of the 70th anniversary of the Chinese People’s Volunteers forces entering the Democratic People’s Republic of Korea to help in the War to Resist US Aggression and Aid Korea (1950-53). The exhibition is at the Military Museum of the Chinese People’s Revolution in Beijing. JU PENG/XINHUA

President Xi Jinping hailed China’s victory in the War to Resist US Aggression and Aid Korea (1950-53)－a victory of justice, peace and the people－on Monday as he urged greater contributions to be made in safeguarding global peace and building a community with a shared future for mankind.

Xi, who is also general secretary of the Communist Party of China Central Committee and chairman of the Central Military Commission, said the Party and government made a historic and resolute decision to resist US aggression, help the DPRK and defend the motherland 70 years ago.

The heroic CPV, upholding banners of justice and disregarding their own safety, fought dauntlessly in battles side by side with the DPRK people and army before winning a great victory and making huge contributions to the cause of international peace and human progress, he said.

The great spirit that was forged during the war is an invaluable spiritual treasure that is set to motivate the Chinese people and nation to overcome all difficulties and obstacles and conquer all powerful enemies, he added.

Xi called for intensified steps to study and publicize the heroic stories of the CPV forces and to learn the history of the Party, the People’s Republic of China, the country’s reform and opening-up and socialist development.

It is important to spur the whole Party, the armed forces and the people of all ethnic groups to rally more closely around the CPC Central Committee, keep firmly in mind original inspirations and missions, firm up triumphalism, give play to fighting spirit and enhance fighting capacities, he said.

Xi was accompanied by other members of the Standing Committee of the Political Bureau of the CPC Central Committee, the Party’s highest body, and Vice-President Wang Qishan while reviewing the exhibition.

More than 540 photos, 1,900 cultural relics and a large number of videos and reconstructed scenes were displayed at the exhibition, which is divided into seven thematic sessions.

On Oct 19, 1950, CPV forces, under a request made by the DPRK, crossed the Yalu River to aid the DPRK’s fight there until a truce was signed in 1953. A total of 2.9 million CPV soldiers entered the battlefield, and 197,653 of them sacrificed their lives in the war.