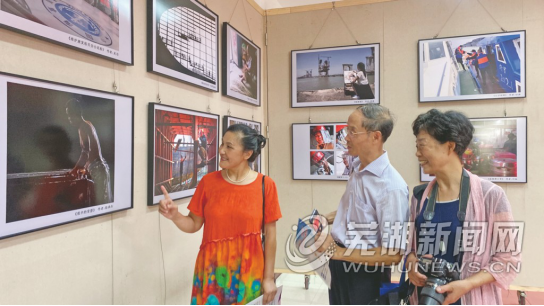 On the morning of September 5th, a citywide photography exhibition namely “Chinese Dream • Labor Beauty”, co-sponsored by Wuhu Federation of Trade Unions, Wuhu Media Center (Group) and The City Photographers Association, was officially launched in the City Workers’ Cultural Palace. A series of excellent photographic works recorded the laboring scenes of workers from all walks of life in the city.

According to the introduction, in order to give full play to the appeal and educational function of photographic art creation, vigorously promoting the spirit of model workers, labor spirit and artisan spirit, since June, the organizers have issued the photo work solicitation. All levels of the city’s trade unions and the general staff responded positively, a total of more than 400 valid entries were received. 100 winning works were selected and exhibited after the comprehensive evaluation by experts. At the scene, the works exhibited focused on the themes of urban construction and the fighting against the pandemic, floods and emergency and recorded the touching moment when the front-line workers united as one and overcame the difficulties together. They attracted many photography lovers and workers to visit and study.

The exhibition will last for one month and will be streamed online at the same time, according to a person in charge of the city workers’ cultural palace. Through this exhibition, it is expected to further show the wonderful stories of workers’ struggle for the decisive victory of overall well-off society and the decisive battle against poverty, and eulogize the  industrial workers’ joint efforts to build the Chinese dream and contribute to the new era.