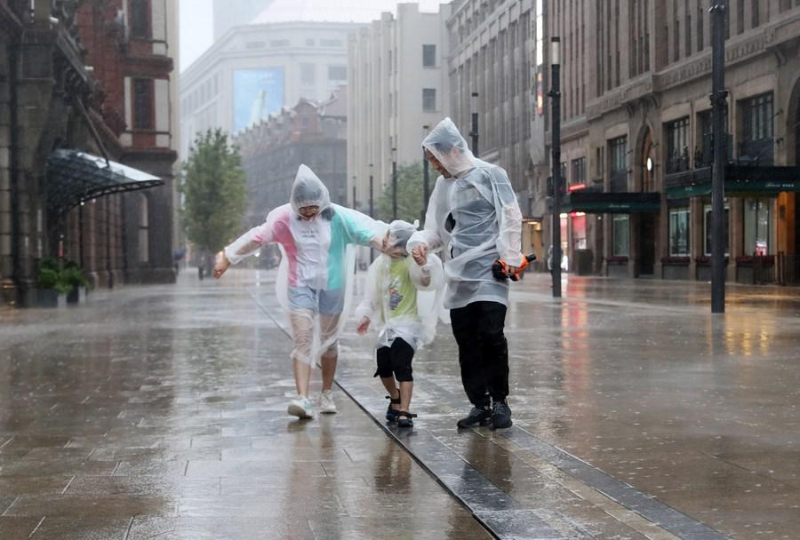 Typhoon In-Fa made landfall in east China’s Zhejiang Province at noon on Sunday, packing winds of up to 38 meters per second at its center, according to the provincial flood control headquarters.

The typhoon — the sixth of this year — hit land in Putuo District, Zhoushan City, at approximately 12:30 p.m., the headquarters said.

Weather authorities have forecast the typhoon will make a second landfall in coastal areas between Zhejiang’s Jiaxing City and Jiangsu Province’s Qidong City on Sunday night.

It is expected to linger in east China after its second landfall and bring continued strong rainstorms to the Zhejiang, Jiangsu and Anhui provinces, and Shanghai.

The typhoon started to wreak havoc in Zhejiang on Saturday, bringing heavy downpours, strong gales and floods. More than 6 km of roads in Zhoushan have been inundated by seawater.

The Zhejiang provincial flood control headquarters upgraded its emergency response for Typhoon In-Fa to the highest level, Level I, at Saturday noon. As of Sunday noon, about 17,000 fishing vessels had returned to ports for shelter, and over 1.5 million people across the province had been evacuated to safe places.

Zhejiang has opened more than 12,000 temporary shelter facilities to the public.

In the neighboring megacity of Shanghai, Typhoon In-Fa had felled over 1,000 trees and caused waterlogging in several places as of Sunday noon.

More than 2,000 rescue teams in the city are on stand-by.

All inbound high-speed trains for Shanghai’s railway stations will be canceled starting from 7 p.m. Sunday, according to railway authorities.

As of 2 p.m. Sunday, nearly 130 tourists spots in Shanghai, including the Shanghai Disney Resort, the Oriental Pearl Tower, and the Shanghai Science and Technology Museum, had closed over safety concerns.

About 360,000 people in Shanghai have been evacuated, and more than 1,700 vessels have returned to ports, the municipal flood control headquarters said.