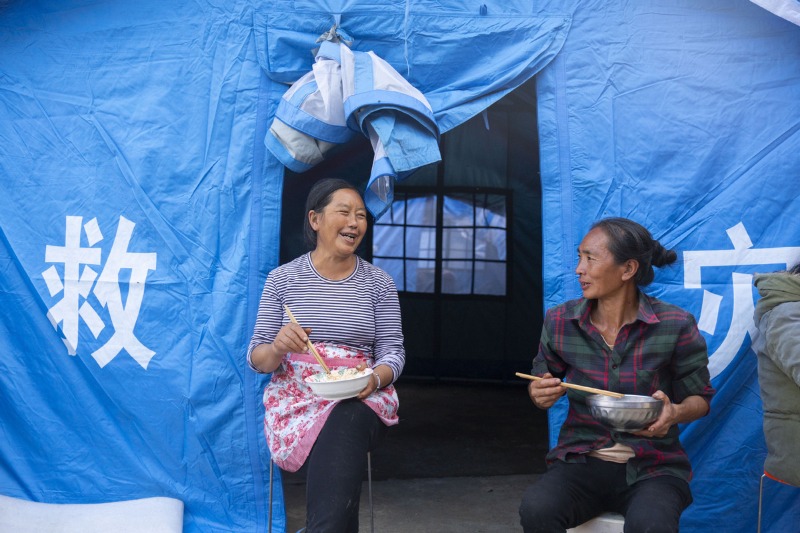 Sichuan province announced the termination of its highest response level to the recent earthquake as of 6 pm on Monday, shifting the focus to restoring infrastructure and resuming daily life in the quake zone.

According to the local rescue headquarters, 55 of the deaths occurred in the Ganzi Tibetan autonomous prefecture, where Luding is located, while 38 were reported in the city of Ya’an, as of 5 pm on Sunday.

Among the missing were nine people in Luding and 16 in Shimian county of Ya’an.

Sichuan authorities announced the termination of the province’s Level I response at a news conference in the town of Moxi, in Luding, on Monday. It said that while efforts to rescue the severely injured and locate missing people will continue, attention will also be given to providing sufficient supplies to people living in the quake zone and restoring electricity, water and telecommunication infrastructure, the provincial authorities said.

Also on Monday, a mourning ceremony for compatriots killed in the earthquake was held simultaneously in Moxi and Shimian.

At 12:52 pm, the exact time that the earthquake occurred, an air defense siren sounded over Moxi, and everyone observed three minutes of silence for those who died in the quake.

Then some leaders from Sichuan and the People’s Liberation Army’s Western Theater Command presented flowers for the victims and expressed their sorrow.

According to the Sichuan Provincial Commission of Health, 423 people who were injured in the quake had been transferred to hospitals as of 4 pm on Sunday.

Among them, the first three earthquake-injured patients were discharged from Ya’an Municipal People’s Hospital on Sunday, the provincial health authority said.

Many places have gradually resumed business. Shops with a green label, which designates that the building has been evaluated and is safe, opened in Moxi on Sunday. Shoppers found a variety of daily necessities, and water, power and telecommunication service resumed in all six villages in Moxi on Sunday, according to CCTV.

In addition, students in some villages returned to schools.

Visitors to Aiguo village of Wanggangping township in Shimian witnessed activities in temporary classrooms of Wanggangping Township Second Primary School, where 106 students resumed classes on Sunday. The school was badly damaged by the earthquake.

“When the earthquake took place, the students were having lunch, and the teachers present promptly transferred them to a safe area, counted the number of people and found no casualties,” school Principal Mao Chengjun said.

Most teachers and students felt uncomfortable on the first night following the earthquake, and they only had a sense of security after the rescue team arrived, he said.

After the quake, the Sichuan Forest Fire Rescue Team moved the students’ school bags, textbooks and daily necessities out of the damaged building. Forest firefighters from the city of Panzhihua, Sichuan, removed benches from the damaged classrooms and completed construction of temporary classrooms in a resettlement building in the village of Aiguo.