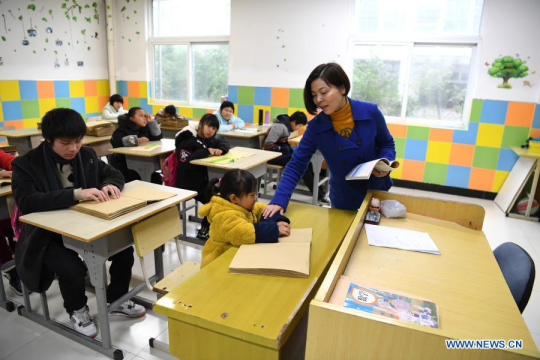 Xi Weijing, head of the Wuhu School for the Blind, gives a class for students with visual impairment at the school in Wuhu City, east China’s Anhui Province, Nov. 26, 2020. Xi Weijing’s parents are both visually-impaired. Her father Xi Manqiao set up a private school for the blind in 1979, devoting all his energy to the work of the school. After her father died of illness in 1994, Xi Weijing, then in her 20s, took the burden and became the second principal of the Wuhu School for the Blind. With the support of local government, the Wuhu School for the Blind has been relocated several times and its operating conditions have been greatly improved. At present, the school has more than 30 full-time teachers and more than 200 students. With a belief that special education is not only about imparting knowledge, but more importantly, shaping souls, Xi Weijing and her colleagues insisted on being students’ friends. She set up several bands for the students, improved the vocational education on massage therapy, and encouraged students to take the college entrance exam for the blind. “I will devote my whole life to the school, bringing a wider world to them.” Xi Weijing said. (Xinhua/Zhang Duan)