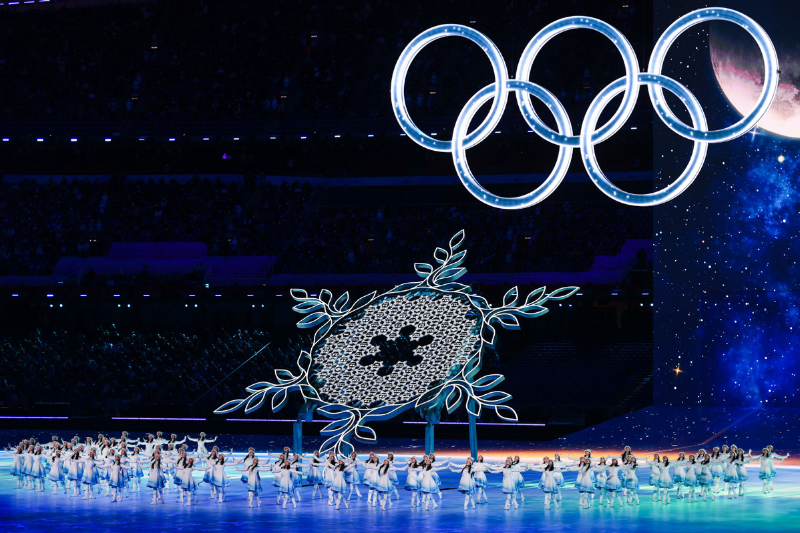 A ‘Forming a Snowflake’ show is presented during the opening ceremony of the Beijing 2022 Olympic Winter Games at the National Stadium in Beijing, Feb 4, 2022. [Photo/Xinhua]

On Feb 4, an eye-catching and much-awaited opening ceremony was held at the National Stadium, also called the Bird’s Nest, in Beijing to officially start the 2022 Winter Olympics. The ceremony attracted the world’s attention, saw the attendance of around 31 world leaders, including heads of states, governments and multi-national organizations, and made history as Beijing became the first city ever to host both a summer and winter Olympic Games.

While the stunning memories of the 2008 Olympic opening ceremony are still fresh, rather than duplicate the 2008 classics, this year’s opening ceremony was just as spectacular and memorable, only lighter, greener and more exquisite. Partly due to the Covid-19 pandemic, Friday’s event was noticeably toned down and shortened to about 100 minutes, with 3,000 people taking part instead of 15,000, compared to the 2008 spectacle. “Being splendid is not necessarily reflected in quantity,” said Zhang Yimou, the chief director of the event. With the use of many cutting-edge technologies such as 5G, machine vision and AI, the ceremony served as a visual feast with fantastic lighting and images, demonstrating the true meaning of “quality over quantity” and technological development of the country.

The opening ceremony started with a countdown of the 24 solar terms, delighting the audience, as the first of the 24 solar terms of this Chinese lunar year “Beginning of Spring” fell on this very day. Spring represents hope and new life. Amid the pandemic and international political controversy, hope is the one thing that the whole world is in desperate need of, to regain trust and restart. Adversity can only be overcome through solidarity.

“Together for a Shared Future,” this Winter Olympics slogan, was incorporated and displayed throughout the entire ceremony. Passing the Chinese national flag was one of the most touching scenes. The five-star red flag was passed by hand by 100 Chinese people of all ages, from all walks of life, and all ethnic minorities, and eventually in the hands of the flag-raisers. Apart from national solidarity, international togetherness was also emphasized. The parade of athletes, instead of having music recorded specifically, was accompanied by a selection of 19 well-known classical music excerpts ranging from “Turkish March” to “Symphony No.5 in C Minor,” to show respect for the culture of the whole world. What’s more, the forming of a snowflake that was a feature of the show perfectly explained the Chinese philosophy of “harmony in diversity” and “strength in unity”. The banners that had been held up in front of teams of each nation as they made their entrance eventually interlocked with one another into one giant snowflake, symbolizing one united human nation, a shared community of mankind. It sends the message that however different we may appear, there’s far more that unites us than divides us.

Denoting the Olympic spirit of “Higher, faster, stronger and together,” the cauldron lighting has always been the most breathtaking part of the opening ceremony. This year, the Olympic cauldron was lit by a Uyghur cross-country skier Dinigeer Yilamujiang and Nordic Combined athlete Jiawen Zhao, to represent gender equality. And for the first time in Olympic history, the small yet powerful flame of the Olympic cauldron also conveyed the idea of a “greener” future and was a call for solidarity, as in, “A single spark can start a prairie fire.” Furthermore, this bold, innovative and revolutionary change was jointly decided by both China and IOC after much discussion, in the hopes of spreading “green” ideas and encouraging people, and for the Games to adhere to the concept of low-carbon and sustainability.

The successful opening ceremony has won the world’s acclaim. It wasn’t just a wonderful spectacle but also a message bearer. It made people wonder and ponder. The world today is undergoing profound transformations and facing multiple challenges under the combined impact of great changes and once-in-a-century pandemic. In this special period of time, besides merely games and competitions, more importantly, the Olympic Games can play a unique role in galvanizing global solidarity and cooperation, and its spirit serves as a beacon for people to get over this difficult time. In the wars against the pandemic, climate change and so forth, no country can be better off on its own. It’s time to set aside prejudices and politics to make room for trust and sound policy. The whole world needs to stick together to be stronger and forge ahead with courage and fortitude, because to build a safe, peaceful and sustainable home requires solutions and actions from not only “me” but also “us”. And China is proud to say, “The world is turning its eyes to China, and China is ready.”