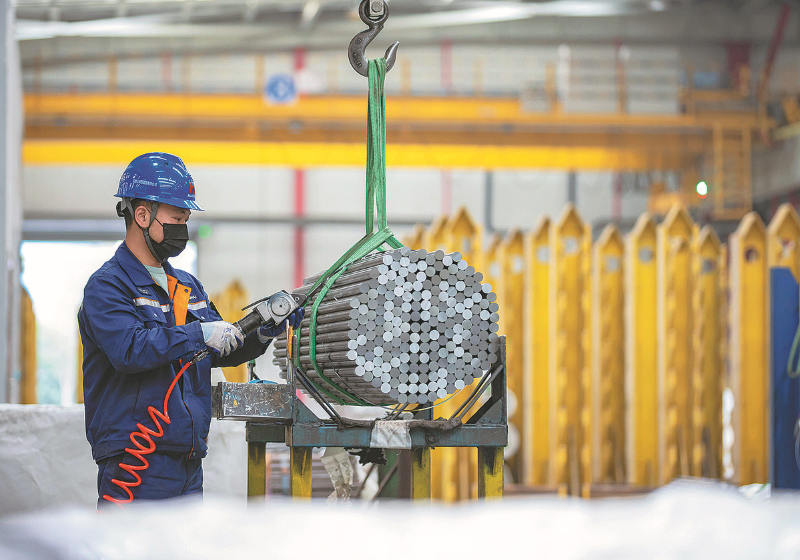 An employee works on the production line of China Baowu in Maanshan, Anhui province. [PHOTO by LUO JISHENG/FOR CHINA DAILY]

Premier Li Keqiang has called for earnest efforts to carry out policies intended to help market entities get out of difficulties, and to stabilize growth, employment and prices in order to ensure that economic operations stay in an appropriate range.

Li made the remarks on Monday during an inspection tour of the State Administration of Market Regulation, according to a statement released on Thursday.

Li urged the upholding of innovation-driven development, the acceleration of the transfer and use of innovation achievements, and the promotion of industrial upgrading.

When visiting the data analysis center of the market regulation administration, Li learned about the development trend of market entities. He said that in recent years, efforts have been made to stabilize employment through protecting market entities, and continued efforts should be made to develop and increase the number of market players.

Addressing a symposium at the nation’s market regulatory body, Li said that over the years, the nation has adhered to market-oriented reform and continued to deepen the reform to streamline the government, delegate power and improve government services. It has also made efforts to build a market-oriented, law-based and world-class business environment, and has provided the people with greater freedom and convenience to run businesses, he said.

In order to alleviate the difficulties and pressure on market players, the nation has consistently implemented policies such as cutting taxes and fees, which has played a key role in keeping the economy’s performance stable, he said.

Li pointed out that the economy is recovering, but market players, especially small and medium-sized enterprises and self-employed businesses, are encountering greater difficulties.

He called for maintaining policy stability and continuing to implement the policy package for stabilizing the economy and follow-up policies. Fiscal and financial policy instruments that support key projects and equipment upgrading and renovation should generate more concrete gains, he said.

Efforts should also be made to promote the recovery of consumption, help enterprises address difficulties in the supply of raw materials and financing, and strive to step up resumption of work and production after the upcoming Spring Festival holiday, he said.