Despite the lack of a GDP growth target, the economy will probably remain stable this year, with government policies focusing on ensuring employment and livelihoods.

That was the message from national advisers and experts at the weekend.


As macro policies and economic reforms filter through, growth will recover and support the prime tasks of stabilizing the jobs market and supporting business, they said.

Following the release of the Government Work Report, which outlined major development goals for the year, attention has focused on the government’s decision to forgo a growth target.

It will not set a target because of the uncertainty engendered by the coronavirus pandemic and the global economic and trade environment, said the report, which was submitted to the National People’s Congress, the top legislative body, for deliberation on Friday.


President Xi Jinping said abandoning this year’s growth target is a realistic option in the face of uncertainty, and focusing on ensuring security in six areas, including employment and people’s livelihoods, is in line with China’s pursuit of a new development philosophy and a better life for its people.

Xi made the remarks while participating in a panel discussion with legislators from the Inner Mongolia autonomous region on Friday, People’s Daily reported.

The decline in GDP growth will be minimized as the nation concentrates on ensuring stability on “six fronts” and security in “six areas”, but the focus should not be on safeguarding a specific GDP growth rate, Xi said.

The “six fronts” and “six areas “refer to the government’s priorities for the year, such as safeguarding employment and livelihoods, and the development of market entities, among other key issues. 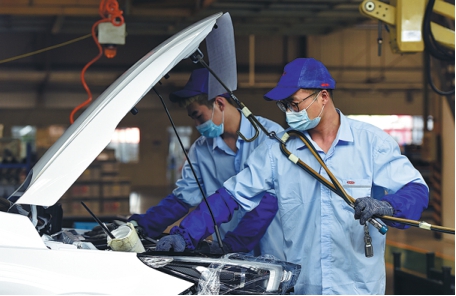 Workers assemble a car at a factory in Wuhu, Anhui province, last week. As the novel coronavirus outbreak eases in China, production is resuming. ZHOU MU/XINHUA

Though the COVID-19 pandemic has been broadly brought under control in China, it continues to spread globally, intensifying economic uncertainty.

The International Monetary Fund is likely to revise downward its previous forecast of a 3 percent contraction in global GDP this year, which would have already signaled the deepest downturn since the Great Depression in the 1930s, Reuters reported.

Liu Zhiqin, a senior researcher with the Chongyang Institute for Financial Studies at Renmin University of China, said that amid unprecedented uncertainty, the government’s decision to abandon a GDP growth target will give policymakers more flexibility to respond to rapid changes in the situation.

A raft of development goals outlined in the Government Work Report will replace the GDP target to anchor market expectations and help guide more resources into high-quality development that stresses improvements in living standards, Liu said.

According to the report, the government will pursue targets related to eight major aspects of economic and social development－such as employment, price levels, foreign trade, personal incomes, poverty elimination and the prevention of financial risks－in line with the requirements of ensuring security in the “six areas”.

”This year, we must give priority to stabilizing employment and ensuring living standards, win the battle against poverty and achieve the goal of building a moderately prosperous society in all aspects,” the report said.


Meanwhile, officials said abandoning the GDP growth target does not mean the government will allow the economy to slide out of the proper range.

The pursuit of stable employment, poverty elimination and financial risk prevention entails support from economic growth, according to Sun Guojun, a senior official at the StatCouncil Research Office, who participated in the drafting of the Government Work Report.

With fiscal support to secure employment and livelihoods, and financial policies to safeguard the development of market entities, the economy will gradually stabilize and recover, Sun said on Friday.

Analysts estimate that China’s fiscal stimulus package will total more than 8 percent of GDP this year, while monetary policy will provide stronger-than-expected credit support for business.

The ramped up macroeconomic adjustments will help China achieve annual GDP growth of about 3 percent, with year-on-year growth expected to exceed 6 percent in the second half, according to Liu from Renmin University of China.

He Qiang, a member of the National Committee of the Chinese People’s Political Consultative Conference, said the country should maintain annual economic growth of between 2 and 4 percent to ensure the accomplishment of major development goals.

”Given the 6.8 percent economic contraction in the first quarter, we must spare no effort for economic recovery over the rest of the year,” said He, who is a professor of finance at the Central University of Finance and Economics.

According to the National Bureau of Statistics, economic indicators recovered from the first quarter as production resumed last month, and the year-on-year change in industrial output turned positive.

The Government Work Report said that in addition to intensifying macroeconomic adjustment and promoting the resumption of business, the country will deepen reform to boost internal development momentum, such as fostering an encouraging environment for the private sector and promoting market-based allocation of production factors.


Wang Yiming, senior economist and a member of the CPPCC National Committee, said such reforms will be essential to overcome the mounting risks and push ahead with high-quality development.

Wang highlighted the pressing need to safeguard the property rights of private enterprises to spur more investment, adding that market-based reforms in land, labor and the capital markets will help drive up productivity.

Experts said that with macroeconomic policies to bail out hard-hit individuals and businesses, and economic reforms to reduce institutional barriers, the fundamentals of the economy remain solid, despite the disruption caused by the pandemic.

”Slower but positive annual economic growth would be acceptable against the backdrop of a contracting world economy and would not point to any major changes in the potential of the Chinese economy,” said Zhang Lianqi, a member of the Standing Committee of the 13th CPPCC National Committee.


With the nation’s efforts to safeguard employment and livelihoods taking effect, the economic fundamentals will remain stable, enabling average economic growth of more than 5 percent this year and in 2021, Zhang added.