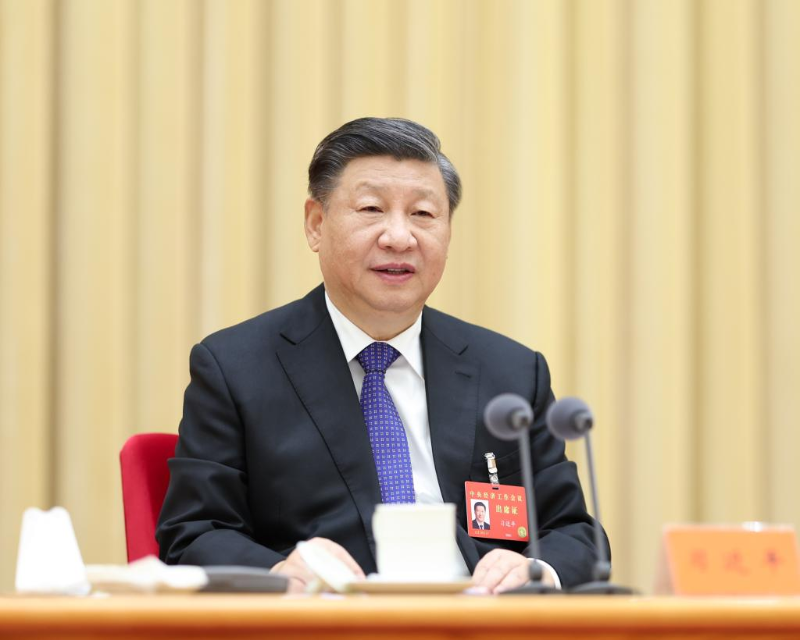 Xi Jinping, general secretary of the Communist Party of China Central Committee, Chinese president and chairman of the Central Military Commission, delivers an important speech at the annual Central Economic Work Conference in Beijing, capital of China. The conference was held in Beijing from Dec. 15 to 16. (Xinhua/Ju Peng)

BEIJING, Dec. 16 (Xinhua) — The annual Central Economic Work Conference was held in Beijing from Thursday to Friday as Chinese leaders decided priorities for the economic work in 2023.

Delivering an important speech at the conference, Xi Jinping, general secretary of the Communist Party of China Central Committee, Chinese president and chairman of the Central Military Commission, reviewed the country’s economic work in 2022, analyzed the current economic situation and arranged next year’s economic work.

It was noted at the meeting that an overall recovery and improvement is expected in the country’s economic performance in the next year, and that a firm confidence is necessary to do a good job in the economic work.

Proactive fiscal policy and prudent monetary policy will continue to be implemented next year. Meanwhile, efforts will be made to intensify macro-control and coordinate various policies to form synergy for high-quality development, according to the meeting.

The proactive fiscal policy should be stepped up for its effectiveness, with a better mix of tools including fiscal deficits, special-purpose bonds and interest subsidies. While high-quality development should be effectively supported, fiscal sustainability must be ensured and local government debt risks should be controllable, the meeting noted.

The prudent monetary policy should be targeted and effective, with reasonable and sufficient liquidity to be maintained and stronger support from financial institutions for micro and small businesses, technology innovation and green development.

The yuan’s exchange rate should be kept basically stable at an appropriate and balanced level, and the systems to safeguard financial stability should be reinforced, according to the meeting.

The meeting stressed that industrial policies should be optimized to facilitate the transformation and upgrading of traditional industries and the cultivation and growing of strategic emerging industries, as well as shore up the weak links in industrial chains and forge new competitive advantages in the country’s pursuit of carbon peaking and neutrality goals.

Social policies should ensure people’s livelihood, put promoting the employment of young people, especially college graduates, in a more prominent position, and strive to mitigate the impacts of structural price rises on some of those in difficulty in a timely and effective manner.

The country will optimize childbirth support policies and seek to gradually postpone the statutory retirement age when time is right and take the initiative to cope with population aging and low fertility rate, it noted.

The meeting stressed better coordinating epidemic prevention and control with economic and social development, urging efforts to optimize epidemic response based on time and situation and focus on the elderly and those with underlying diseases.

Stronger coordination should be also achieved between qualitative and quantitative growth, between supply-side structural reform and domestic demand expansion, as well as between economic policies and other policies, the meeting said.

The meeting also stressed the need to handle current work well and at the same time take future development into consideration.

Pointing out that there are a multitude of tasks in the economic work in 2023, the meeting underlined moves to improve public expectations and boost confidence for development.

The country will focus on boosting domestic demand next year by prioritizing the recovery and expansion of consumption, increasing urban and rural personal income through multiple channels and encouraging more private capital to participate in the construction of key national projects, said the meeting.

China will accelerate the building of a modern industrial system, according to the meeting. Efforts will be made to identify the weak links in key and core technologies as well as components and parts in the country’s major manufacturing industrial chains, and pull together resources to tackle the problems so that the industrial system is independent, controllable, safe and reliable, said the meeting.

Efforts will also be made to speed up the planning and construction of a new energy system, enhance the global competitiveness of traditional industries, accelerate the research and application of cutting-edge technologies, and vigorously develop the digital economy.

The meeting urged efforts to deepen the reform of state-owned enterprises (SOEs) while improving their core competitiveness, requiring that legal and institutional arrangements must be made to ensure the equal treatment of private enterprises and SOEs.

Law-based protection will be provided to the property rights of private enterprises and to the interests of entrepreneurs, the meeting said.

China will actively seek to join the high-standard economic and trade agreements such as the Comprehensive and Progressive Agreement for Trans-Pacific Partnership and the Digital Economy Partnership Agreement, the meeting said.

The meeting also stressed effectively forestalling and defusing major economic and financial risks, promoting the steady development of the property market, ensuring timely deliveries of pre-sold housing and meeting the reasonable financing demand of the sector.

Efforts need to be made to effectively prevent and defuse risks of high-quality and industry-leading developers and improve debt-to-asset ratio of the real estate sector, said the meeting.

People’s basic housing needs and the need for improved housing conditions should be met, while a long-term rental housing market is to be explored.

Sticking to the principle that “housing is for living in, not for speculation,” the country is seeking to promote a smooth transition of the real estate industry to new development models, according to the meeting.

The meeting stressed the necessity to adhere to the centralized, unified leadership of the CPC Central Committee over financial work, and called for efforts to prevent and defuse local government debt risks.

Rural revitalization will be advanced across the board, ensuring that people do not return to impoverishment in large numbers. The high-quality development of the Belt and Road Initiative will also be promoted.

For an economy of China’s size, it is vital to maintain a stable economic performance. Efforts will be made to stabilize growth, employment, and prices so that major economic indicators will stay within an appropriate range, the meeting noted.

The innovation and creativity potential of the whole society should be unleashed to the greatest extent, according to the meeting.

The potential of the domestic market will also be fully tapped so that domestic demand can play a stronger role in driving economic growth.

The construction of major projects to shore up weaknesses will be pushed forward, with a focus on economic development and the urgent needs of the people.