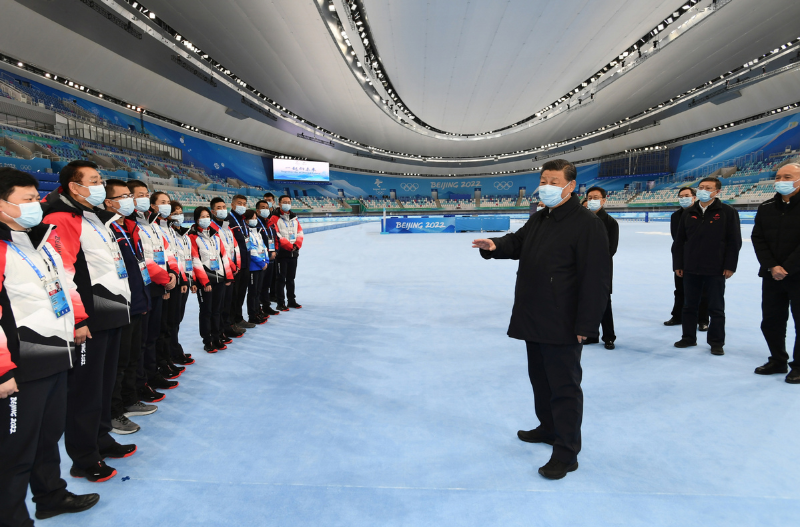 President Xi Jinping, also general secretary of the Communist Party of China Central Committee and chairman of the Central Military Commission, visits the National Speed Skating Oval in Beijing, on Jan 4, 2022. Xi inspected the preparations for the 2022 Olympic and Paralympic Winter Games in Beijing on Tuesday. [Photo/Xinhua]

BEIJING – Chinese President Xi Jinping has urged organizers to continue to work hard in the final stages of their preparations to ensure the complete success of the 2022 Olympic and Paralympic Winter Games.

Xi, also general secretary of the Communist Party of China Central Committee, made the remarks during his latest inspection of the Games’ preparatory work on Tuesday.

Xi said that a successful Beijing 2022 is China’s solemn commitment to the international community and after years of preparations, everything is ready.

“We are fully confident and capable of presenting to the world a fantastic, extraordinary and excellent Winter Olympics,” Xi noted.

At the National Speed Skating Oval, known locally as the “Ice Ribbon”, Xi inspected the interior decoration and track, and learned about the venue’s Games-time operation plan and event service preparations.

The National Speed Skating Oval is the only newly-built ice sports venue in the Beijing competition zone, and will stage speed skating competitions during the Winter Olympics.

Xi lauded the National Speed Skating Oval as a good example of low-carbon operation and multi-purpose utilization which has followed the “green, inclusive, open and clean” approach.

More Chinese elements should be integrated in the venue’s operation to make it an important window to showcase the unique features of Chinese culture and winter sports development, Xi said.

The “Ice Ribbon” is one of the first venues in the world to use carbon dioxide transcritical direct cooling ice technology for ice-making.

Xi noted that this technology should be promoted so as to contribute to the ecology-friendly transformation of China’s economy and society, as well as achieving low carbon dioxide emissions and carbon neutrality.

In line with the concepts of hosting a green and frugal Games, the MMC features both the Main Press Center and International Broadcasting Center, and coordinates Games-time service and post-Games exhibition.

Noting that epidemic prevention and control is the biggest challenge for Beijing 2022 organizers, Xi said that access to watching the Games on site will be very limited due to the pandemic and extra importance should be attached to broadcasting and news reporting of the Games.

Xi thus called for efforts from the MMC venue operation team to ensure the smooth operation of news reporting, transmitting and broadcasting, with pandemic prevention and control measures such as the double closed-loop management in place.

Xi also hoped that domestic and overseas media outlets would better present stories about athletes fighting for Olympic glory, China’s endeavor in staging the Games and the Chinese people’s hospitality to showcase Beijing 2022 to the world in an all-round, dimensional and vivid manner.

Xi inspected the Athletes’ Village and heard reports on its construction, operation and COVID-19 countermeasures.

Xi noted that it is a good practice to convert the Village’s buildings into apartments after the closing of the Games, with its long-term use already taken into consideration.

He also hailed its courtyard-style design for demonstrating Beijing’s unique charm as a modern city with time-honored history.

During his visit to clinics and residence rooms for Paralympic athletes in the Village, Xi stressed the need to make facilities accessible and the importance of providing convenient, timely and meticulous services to the athletes.

At the Athletes Village, Xi also spoke to the operation and service team staff and volunteers, and praised their hard work.

The successful hosting of Beijing 2022 will not only enhance our confidence in realizing the rejuvenation of the Chinese nation, but also help present China as a positive, prosperous and open nation committed to building a community with a shared future for mankind, Xi said.

He added that working as volunteers for the Olympic and Paralympic Winter Games is a rare opportunity in one’s life, and called on the volunteers to work wholeheartedly and strengthen teamwork to ensure Games services go smoothly, and allow Games participants to feel the hospitality of Chinese people.

In the Games-time Operations Command Center, Xi stressed that a coordinated command system would be key to the success of Beijing 2022, and that the three competition zones should enhance coordination and centralized command.

Xi called on related sectors to fine-tune their work in the final month through test runs and close any loopholes.

Xi then visited Erqi Factory Training Base for Ice and Snow Sports, where a few Chinese national teams are gearing up for the Games.

Pushing forward the development of sports technologies is needed to build China into a sporting powerhouse, he said.

Xi watched a training session of China’s speed skating team and encouraged them to prepare in a scientific manner and strive for excellence.

He called on the athletes to fight bravely, fight smart and demonstrate Chinese athletes’ spirit and skills on the Olympic stage.

Xi also wished the athletes good luck at Beijing 2022, which was met with applause and chants of “we are ready!”

After visiting an exhibition about the development of winter sports in China, Xi said that China has achieved its goal of engaging 300 million people in winter sports.

He stressed that the ultimate goal of building a sporting powerhouse and a healthy China is to strengthen the people’s fitness, which also forms an essential part of China’s endeavor to build a modern socialist country in an all-round manner.

The enthusiasm brought about by Beijing 2022 should be maintained to promote sustainable development of winter sports at both elite and grassroots levels, Xi added.