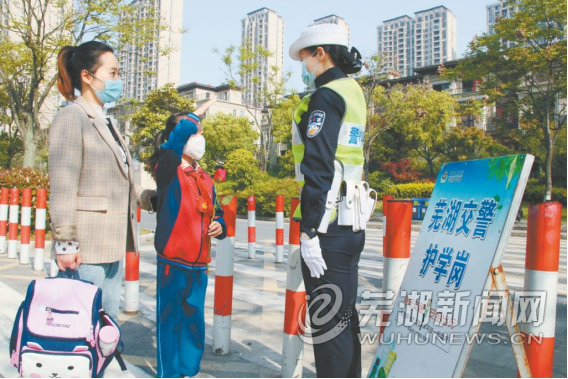 On 26th, April, the forth, fifth and sixth grades in primary schools and the first and second grades in high schools in Wuhu City started resumption. On the same day, the first female police guard of the Traffic Police Detachment of the Public Security Bureau of Wuhu City was officially established and went on duty.

On that day, Traffic Police Detachment of Wuhu Public Security Bureau held the unveiling ceremony for the establishment of the first female police guard in the west campus of Primary School Affiliated to Anhui Normal University. Subsequently, 6 female traffic police officers formally took up their duties, becoming a beautiful scenery line for guarding the campus. It is understood that the first female police guard was organized by Yijiang Brigade under the Traffic Police Detachment of the Public Security Bureau of Wuhu City. At present, there are 6 female police officers with an average age of 26 years old in this post, mainly undertaking tasks of road safety education and students protection around this primary school in the morning, afternoon and evening school rush hours to ensure the traffic safety of the students. It is known that other schools also arranged traffic police guards at school gates.