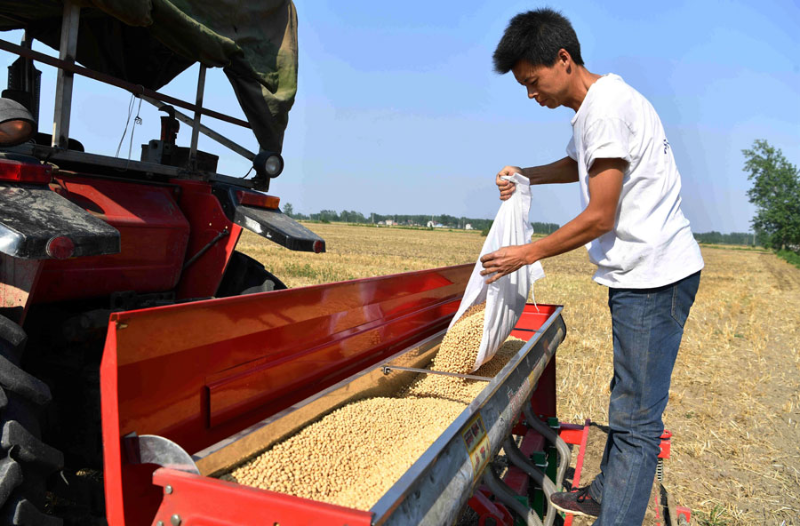 China released an action plan recently on expanding the planting of soybean and oil crops at State-owned farms to ensure national food security and the supply of important agricultural products, according to the Ministry of Agriculture and Rural Affairs.

This year, the country will plant more than 973,300 hectares of soybeans and 300,000 hectares of oil crops including rapeseed, sunflower and peanuts at State-owned farms, and the yield of soybean and oil crops is expected to increase by 2 percent, the plan said.

State-owned farms are being urged to develop and utilize scientific crop rotation and combined planting of soybeans, corn and cash crops in the Inner Mongolia autonomous region and in the provinces of Heilongjiang, Jilin and Liaoning, while promoting strong seed varieties and advanced agricultural machinery, according to the plan.

State-owned farms in major agricultural production areas should rotate rapeseed and forage grass, and rice and oil crops, it added.

Zhang Wenli, a researcher at the ministry’s rural economy research center, said crop rotation, which involves the seasonal rotation of different crops on the same piece of cultivated farmland, can increase land yields and protect the fertile black soil in Northeast China.

The plan proposed promoting a batch of soybean and oil crop varieties with robust performance.

Seed enterprises that supply State-owned farms are being encouraged to cooperate with colleges and scientific research institutions in cultivating robust varieties that can tolerate high saline and alkaline soils, resist poor growing conditions and are suitable for agricultural machinery.

With fertile farmland and high commodity rates, State-owned farms must take the lead in safeguarding national food security and the supply of agricultural products, according to Xinhua News Agency.

Heilongjiang has the largest State-owned farm in China and soybean production in the province accounts for 40 percent of the country’s total.

The Mudanjiang base of Beidahuang Agricultural Reclamation Group, a State-owned enterprise in the province, plans to plant 73,000 hectares of soybean this year, an increase of 56 percent year-on-year, according to Farmers’ Daily.

The farm in Mudanjiang established a demonstration zone for cultivating high-yield soybean varieties, precision sowing, fertilizing and spraying pesticides to improve the efficiency of growing soybeans.

The seeds cultivated on the farm are expected to grow across 253,000 to 333,000 hectares of farmland, with a per hectare yield hitting 3.75 metric tons.

The farm has bought advanced farming equipment including high-speed harvesters and automated seeders, and two vehicles with autonomous navigation systems.

Autonomous operation throughout the farming process from planting to storage is to be achieved at the farm.

Zhang said State-owned farms must have advanced agricultural machinery and a complete business chain involving processing and marketing, so they can contribute to higher marketability of agricultural products.

“The comprehensive management of State-owned farms can reduce grain loss and benefit farmers greatly,” she said.

Beidahuang group provides group-purchasing services for smaller farms. The group buys seeds and fertilizers at lower prices and manages the entire process from production to sales, which ensures the profits of soybean growers, according to China Rural News, a media outlet of the ministry.

This year, expanded planting of soybeans and oil crops has been stressed by China’s top leadership and agriculture authorities in a bid to boost self-sufficiency in agricultural products.

More than 80 percent of China’s soybean consumption relies on imports.

The ongoing Russia-Ukraine conflict is affecting global oil crop supply as Ukraine is the world’s top exporter of sunflower oil and rapeseed.